Warming Up to Cold Brew

Warming Up to Cold Brew

American consumers have discovered cold brew coffee and are showing their excitement with significant sales growth.

When a local water emergency in Salem, Ore., recently made it impossible for baristas to serve coffee hot they turned to the only item available – cold brew coffee.

Customers were experiencing cold brew for the first time, the manager at one local Starbucks said, adding that many who discovered the drink early in the water crisis regularly returned for more.

A water shortage is not a textbook marketing strategy for introducing new products, but the incident in Oregon illustrates a US phenomenon: Consumers are willing to try and continue to buy cold brew coffee.

“People are definitely changing their taste for coffee and willing to accept a beverage they would not have had otherwise,” said John McClafferty, president of CoffeeWorks, Inc., a manufacturer of cold brew coffee equipment. “Preferences are changing. Now that they’ve been exposed to it and understand the better flavor profile that can be presented in cold brew, there’s going to be a continuing shift.

“We’re still in the infancy of cold brew.”

One in 10 people surveyed drank a cold brew coffee in the past week, the study showed. Overall, nearly a quarter of all surveyed consumed a cold brew in the past year. (Cold brew is defined in this study as a drink “made by steeping coffee in cold water for several hours.” Traditional iced coffee was not included.)

Further, the study indicated 15% of coffee drinkers ages 18 to 24 had a cold brew in the past week. Those 25 to 39 scored even higher at 17%. All other age segments showed double-digit percentages except those 60+ years of age (4%).

“Cold brew coffee has exploded in popularity in recent years,” NCA stated in a draft version of its industry guidelines dated April 30. “Consumers view it as a premium product, which offers both convenience and quality. Many businesses are considering cold brew as a potential revenue stream worth exploring, while others have already enthusiastically entered the market.”

And, of course, the coffee behemoths are in the game. JAB Holding Company investment firm took the first step in 2015 when its Peet’s Coffee & Tea division acquired Stumptown Coffee Roasters in Portland, Ore. Stumptown in 2010 was one of the first to make large-batch cold brew 10 pounds at a time. The first of its now-famous stubbies was delivered in March 2011.

Nestlé USA acquired California’s Blue Bottle Coffee in September 2017 and Texas-based Chameleon Cold-Brew, the largest of the US cold brewers, two months later. Chameleon and Stumptown continue to be the retail leaders in the United States.

And while cold brew continues to be tracked within the ready-to-drink coffee category in many reports, it’s rapidly becoming a story all its own. Cold brew has grown almost 350% in popularity during the past five years. It still has a relatively small base in terms of volume, but plenty of believers in the industry.

McClafferty is one of them, balancing on the cutting edge of the cold brew growth curve. He and a business partner launched cold brew manufacturing equipment company CoffeeWorks three years ago in Coeur D’Alene, Idaho. He watched as sales slowly grew to 12 of the $15,000 systems in 2017. During the first six months of 2018, orders doubled for the company’s scaleable production system with capacities ranging from 50 to 5,000 gallons at a time. He expects many more orders.

“We’re hoping to be doing five systems per month starting in September,” he said. “Hopefully we’ll be able to continue that pace and even grow it throughout 2019.”

That New Orleans taste was nothing new to Bebe Goodrich, another coffee entrepreneur who now serves as director of liquid innovation for Alabama-based Royal Cup Coffee and Tea, a coffee importer and roaster for nearly 125 years.

“I grew up in New Orleans where cold brew is ubiquitous,” Goodrich said recently. “We have seen a huge growth [in cold brew sales] in the last five years but in New Orleans, it has always been the dominant drink.”

Goodrich couldn’t find “that flavor, that spirit and experience” outside her hometown so she started making it on her own, founding Icebox Coffee in 2012 when “cold brew was not a big thing.”

Icebox was percolating nicely when she took her product to a Walmart “open call” where businesses could pitch products and concepts to the American retailing giant. Walmart liked what it tasted in Icebox’s cold brew.

“Walmart gave us the opportunity,” Goodrich said, “but it was an opportunity we couldn’t manage on our own.”

Goodrich turned to Royal Cup which had been Icebox’s roaster from day one. Royal Cup acquired Icebox and Goodrich took the lead on the company’s liquid products – cold brew, teas, and juices.

“I didn’t realize at the time what Icebox had stumbled on, an emerging category shift. I grew up on it so, in my mind, we were not innovating,” she said. “We took the cold brew coffee we grew up on and made it shelf stable.

“What makes Royal Cup relevant moving forward is that we can make it shelf stable and accessible to people.”

While Icebox was developing cold brew rooted in chicory, Stumptown was making its name among specialty coffee consumers in the Pacific Northwest.

“What Stumptown did was they brought cold brew to the forefront for the Third Wave consumer,” Goodrich said. “They made it mainstream. We have to applaud companies that help bring specialty products to the forefront.”

Goodrich said the cold brew market will only increase with time. Investors large and small across the coffee industry appear to agree.

“The experience is so tangibly different that there’s no way to go back. Cold brew delivers a superior product,” she said. “Cold brew only entered the mainstream market in the past two summers. It has a lot of runway in front of it. In three years we still may be saying there are so many opportunities.”

“People are coming to the realization that cold brew is not a fad. More people are willing to invest. Small roasteries are buying our 50-gallon producing units. Coffee shops are producing their cold brew in-house. Large cold packers are buying 3,000 gallons,” he said.

“We have systems in Europe, Dubai, the United States, and Mexico,” he added. “Early adaptors in Europe have seen it blow up over here and they want to get ahead the curve over there.” 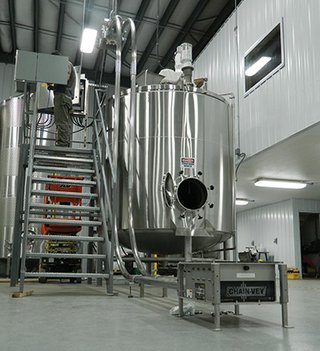